Losing a Loved One...

Yesterday morning we had to make the horrible decision to say 'goodbye' to our beloved 'cat-child' Thomas.  He was over 20 years old, with an immense interest in life and settled in his ways.  Until the end of last week we believed that he might be the cat that lived for ever BUT he had terrible arthritis through his legs and back.  We managed this with pain killers and it became clear that we couldn't keep on top of his pain with the dosages that we could give him.
On Monday the vet gave him a opiate pain killer through injection and gave us four further doses to administer over the next 36 hours.  She told us that this should make him very sleepy and give him some relief.  Sadly he responded badly to the drug and started to move round the house even more.  His eyes were dilating and it was clear that he was hallucinating.  After a phone consultation with the vet, we popped him in a safe place and waited for the drug to clear his system.
By Tuesday lunchtime I had to find the objectivity to say that the kindest thing would be one more trip to the vets....  We kept him as comfortable as possible with as much standard pain killer as seemed appropriate so I know that he wasn't stressed or hurting.
For anyone else who's been in this situation, you'll know that WE'RE stressed and hurting a lot though.  In the last 24 hours I've become a 'domestic demon' and the house is starting to sparkle.  There's something about routine actions that really helps.  I went on FB yesterday afternoon to let people know.  This morning I couldn't bear the absence of a little sleeping cat in the lounge so I decided to come up to the study and post this...... So here's Thomas's time with us in a few pictures.
Spring 2003..he came to us from Blue Cross as a youngish cat.
He's always been tiny (about 3.5kg) so we thought he was a teenager.
We found out subsequently that he was about 5! 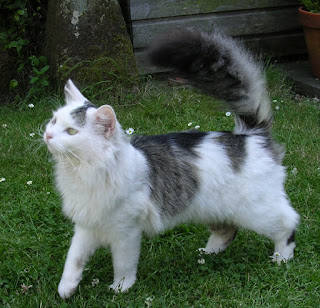 Christmas 2005 - my all time favourite photo of Thomas.
He never jumped into the tree but he loved watching the sparkling lights.
(In fact he loved bling of any type and would even wear my most sparkly necklaces!) 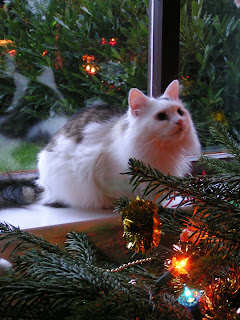 On neighbourhood watch in our bedroom window.
He spent SO much time doing this.  He was desperately territorial and this was the perfect vantage point to watch the cats across the road... 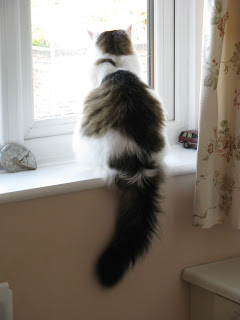 2011 - Crashed out in his cat bed.
By this stage he was about 14 years old and his default setting was a good sleep in a warm place. 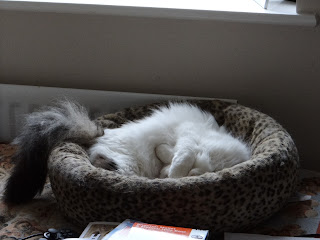 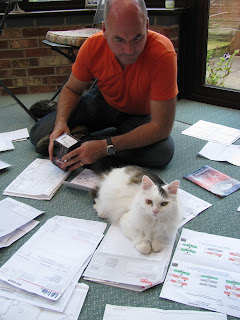 A few weeks ago...
He spent the whole of summer 2017 soaking up the heat in the conservatory. 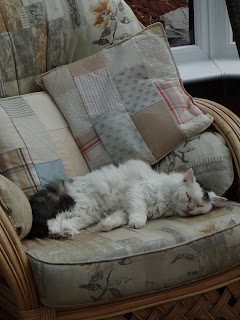 God I miss him.
Jx